We’ve spent the past month and a half working long hours to bring this update to you, and we hope you like it:

As we slowly make our way towards Espionage’s first birthday, its helper has been relatively unknown for the major role that it plays. Normally the only hint of its existence would be the occasional notification or password prompt, and sometimes, less fortunately, an indirect hint of its presence when Espionage suddenly “stops responding”.

Today this is all changing, as for this release we’ve focused almost exclusively on it. We’ve completely rewritten and redesigned Espionage’s helper. It is much more responsive, more stable, and far more powerful in its capabilities.

You can now do things like encrypt a new folder while interacting with your other locked folders. And the new architecture has finally allowed us to complete a much needed feature…

What used to be a sad little menubar item:

Is now a powerful and convenient way of managing your Espionage’d folders: 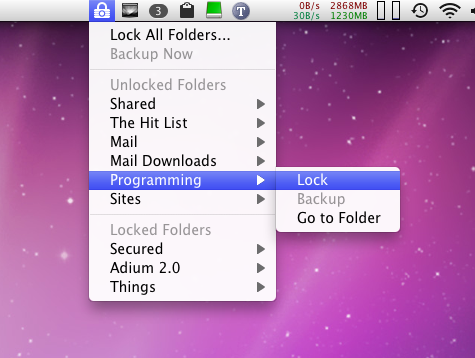 Path Finder users rejoice! Espionage now has a checkbox for you in its general preferences. Just enable the Path Finder compatibility mode, and Espionage will work seamlessly with your favorite file manager.

If you’ve enabled update checking (and we hope you have) Espionage’s helper will now quietly check to make sure you’re running the latest version. If it sees that you’re out of date it will post a single notification letting you know.

You’ll notice many other tweaks and improvements in this update.