After over a month in development, Espionage 2.1 is ready.

Espionage 2.1 is a significant update, and one of the major changes is full support for Snow Leopard. Espionage 2.1 itself can be thought of as a “Snow Leopard” kind-of update in that on the surface it may appear to be very similar to 2.0.8, but beneath its familiar exterior is a fully revamped interior.

This is a significant update that everyone using Espionage is strongly encouraged to update to, as it contains many significant bug fixes, including a fix for a rare kernel panic that could occur in previous versions of iSpy. Also, because 2.1 updates iSpy the iSpy installer will run again. You will not need to restart or logout though, unless after performing the update Espionage cannot establish communication with its helper.

One other note is that we’ve had the chance to finally investigate the Logitech Control Center issue, and it turns out that Espionage is compatible with it, but only with the latest version of LCC (as of this writing, 2.7). Espionage 2.1 will detect if you have an older version installed and will refuse to run until you update to the latest version. Click here for more information.

In previous versions of Espionage, adding an already encrypted folder to Espionage (for example, a folder you retrieved from backups), you needed to know two pieces of information: how the folder was encrypted originally, and what password was used to encrypt it.

Now you only need to know only one piece of information, and that’s the password that was used to encrypt the folder. Espionage will automatically detect the folder’s encryption for you: 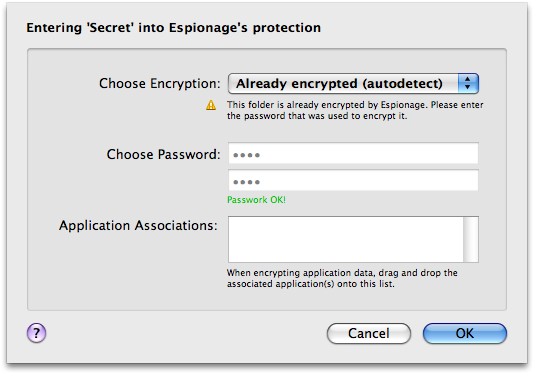 Espionage 2.1 is now ready to be used on Snow Leopard, so those of you who have pre-release versions of it installed can now use your favorite encryption tool on it! 🙂

iSpy has also been updated, it is now much more robust, and a few small memory leaks have been plugged. A small number of users experienced kernel panics with the previous version, this is now fixed in 2.1.

We received some emails saying that our backup documentation could use some work, and hopefully with 2.1 we’ve addressed your concerns. It now includes documentation on how to restore or backup using Espionage’s backups, Time Machine, or using a third-party software/service. Check it out!