This is a followup to yesterday’s post: Sky Not Falling: Sparklegate Not As Bad As It Could Be

After trying and failing to reproduce Sparklegate, I arrived at the conclusion that Gatekeeper and Quarantine did in fact protect OS X users from the Remote Code Execution (RCE) attack.

Radek, the discoverer of the vulnerability, insisted that I was mistaken and that Gatekeeper really did get bypassed. So today I attempted to reproduce the attack using a fresh account on a different machine.

It turns out, if you’ve ever opened Firefox, you are not vulnerable (to the FTP version of the attack), even if Firefox is not running and you’ve manually set the Finder as the default FTP handler.

Resetting the protocol handler via duti -s com.apple.finder ftp  has no effect for some reason. Firefox will still launch in response to the attack and the FTP handler is magically reset back to Firefox!

However: if you’ve never run Firefox on your account, then you are vulnerable (and you should pay attention even if you have used Firefox).

How To Protect Yourself From Sparklegate

Sparklegate is a fundamental flaw in OS X, not Sparkle. It is a flaw in Finder (foremost) and WebView (second most). You almost certainly have several apps that are vulnerable to this attack, and even if every app updates its Sparkle framework there still might be others that are vulnerable.

So here are 3 ways to protect yourself from getting owned, and I recommend you do all of them:

Firefox users are saved by a “bug” (that I hope never gets fixed).

The duti utility mentioned in my previous post can prevent this attack by changing the default app that handles a protocol.

If necessary, install Homebrew, and in a terminal window run these commands:

If Firefox is not installed you’ll need to change org.mozilla.firefox to com.apple.Safari like the others. I recommend Firefox because unlike Safari it does not auto-mount anything and it’s a great browser in its own right.

Just in case there are other protocols that could be used in this attack, you may also want to:

3: Use Little Snitch (or similar) to disable LAN & Finder connections

Open Little Snitch Configuration and make sure that you are looking at All Rules. Use the search field to search for Finder and delete any rules that appear in the search results.

Next, clear the search field and scroll to the top. Uncheck the rules that allow “Any Process” to make outgoing connections to the local network and click “Disable Anyway” when prompted:

Something like this might appear if you’re being attacked via FTP, but it’s not necessarily the only prompt to watch out for: 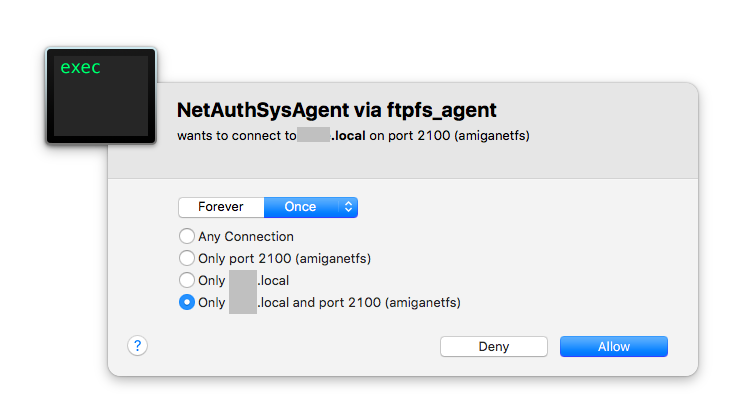 Click Deny in such instances to prevent the attack. You’ll then be greeted with an error like this: 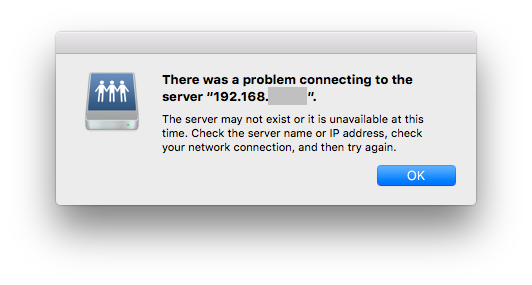 Finally, Make Sure Gatekeeper Is Enabled

While Gatekeeper won’t protect users who have not done at least one of the things above, it will provide additional protection in case the AFP or SMB protocols are used:

If you must open an unsigned app while Gatekeeper is on (not recommended unless you know what you’re doing): right-click on the app and choose “Open” from the contextual menu.

This is a devastating vulnerability that affects many OS X users. Since both WebView and the Finder are at fault, the attack goes beyond apps that haven’t updated their Sparkle framework.

Until Apple fixes this problem, you can protect yourself by doing at least one of the three things mentioned above, and preferably all of them.

Thanks to Radek for insisting that I had missed something and for discovering this vulnerability. Thanks also to Simone Margaritelli for making it simple to use the exploit, for without that I would have been hard-pressed to learn how to defend against it.

Apple told me they are aware of this problem. I hope they’re able to fix it ASAP!

11 thoughts on “Apologies! Sky Kinda Falling + Protecting Yourself From Sparklegate”