My favorite Twitter client is EventBox by The Cosmic Machine. And while it has a million great features like support for Instapaper and a great interface, it’s missing one critical piece of functionality and that is support for multiple profiles. However, it’s still possible to use EventBox with multiple profiles, but perhaps not at the same time.

One solution is a great little program called rooSwitch. It can be used with EventBox to give you the ability to switch between different isolated profiles, each with its own settings. You could configure rooSwitch with multiple EventBox profiles, say for example one for each Twitter account that you use: 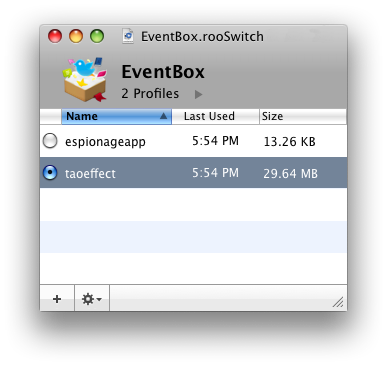 While rooSwitch is great, I don’t have much use for it besides switching EventBox profiles, and I’m a terminal fiend anyway, so I wrote a simple newLISP script called ebswitch that does this for me. Here’s an example session:

ebswitch is a newLISP script, so to use it you’ll need to make sure that newLISP is installed (Intel/PPC), and don’t worry, one of the great things about newLISP is how small it is. Then, after downloading ebswitch to your Desktop, install it into your /usr/local/bin (or /usr/bin) like so:

Update: ebswitch 0.2 adds more intelligence and can now quit EventBox for you.